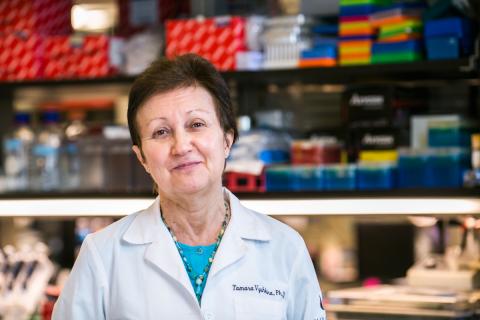 "For me, connecting with a patient story has been the driving force behind my stem cell research. Working at the Tisch MS Research Center has a meaningful impact both personally and professionally."

Dr. Vyshkina currently works in Dr. Harris’ team studying therapeutic use of bone marrow mesenchymal stem cell-derived neural progenitors (MSC-NPs) as a strategy for repair and regeneration in MS. Dr. Vyshkina has developed cell culture and quality control procedures for the growth, differentiation, and characterization of autologous MSC-NPs from MS patients, as described in recent publications.

Dr. Vyshkina received her PhD in Chemistry from Kiev State University, Ukraine, and her MS in Biophysics from Moscow State University, Russia. From 2003 to 2006 she worked at the MS Research & Treatment Center at Roosevelt Hospital. Her research was in the field of statistical genetics, investigating the role of CC chemokine ligands and Complex I genes in multiple sclerosis and association of marker haplotypes within chromosome 17q11 region with the disease in family-based and case-control studies. In 2001-2003 she was a postdoctoral fellow at the Department of Biochemistry and Molecular Biology at College of Medicine, Pennsylvania State University.